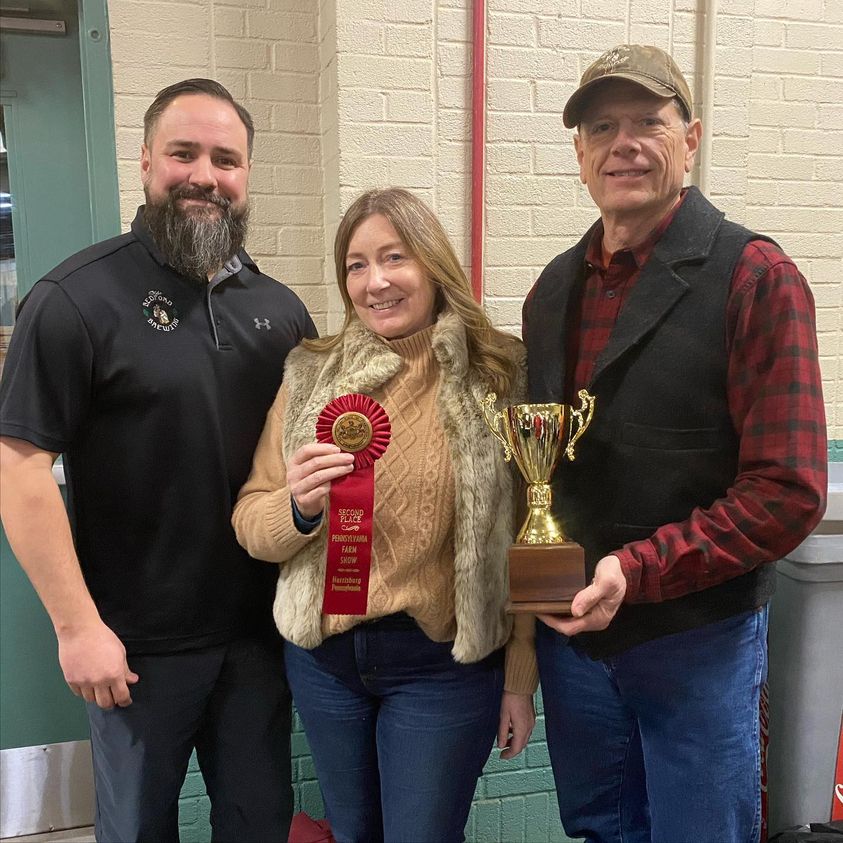 OldeBBC is proud of the historical legacy of our hometown, Bedford PA.  Our customers recognize the ties we have made between our recipes and the rich history of our region.

Hops and History has written a book about the many breweries around the country that are honoring the people, places, and events in their regions. They have included a feature about us and our 1794 Rebellion Rye IPA, which is named after the Whiskey Rebellion.  This beer and its name ties into the rich history of our town and its role in the rebellion and to President George Washington and Alexander Hamilton.

For more information, check out the Hops and History website.

Written by John Jennings on December 25, 2017. Posted in Uncategorized.

We know there is a rich tradition of brewing in Pennsylvania and the early American colonies.  But clues found in the Reiley Ledger from the late 18th century give clues to an early Bedford County brewing tradition. (see photos below)

The consumption of beer was common in the colonies. (Smith, 1998) For example, scholars have presented evidence a standard breakfast of the period included “cold meat with a pint of good ale or cider.” (Smith, 1998) Additionally, new arrivals to the colonies in eastern Pennsylvania found a large selection of beer. (Smith, 1998)  One of these Philadelphia newcomers was Benjamin Franklin, who in 1745 wrote how he enjoyed a stout ale with other pleasures. (Smith, 1998)

During the time leading up to the famous Whiskey Rebellion of 1794, Philadelphia’s and Bedford’s favorite visitor, George Washington, was himself partial to a good Porter (a roasty, caramelly beer).  (Baron, 1962) Additionally, in the 1760s, he was known to purchase his porter from Robert Hare of Philadelphia. (Baron, 1962)  During the 1790s, Washington was also purchasing his Porter from another Philadelphia brewer, Benjamin Morris. (Baron, 1962) Additionally, by 1796, as Washington was finalizing his plans for leaving his presidency, he “… procure a groce of good Porter to be taken there….” (Baron, 1962) OBBC would argue, when George came to put down the Whiskey Rebellion, he continued to enjoy a good Porter!

OldeBBC reviewed the Store Ledger kept by Martin Reiley 1788-1816, Bedford, PA. (Reiley, 1788) This examination provided us with a window into the past.  The use of distilled spirits in around Bedford, as a local commodity, is evident while examining the many eateries with the words, Gin, Whiskey, Wine, Sherry, and French Brandy.  But a closer examination of some of the entries, reveals the possible evidence of the spirit of homebrewing and beer consumption in the county.  Consequently, we believe these are clues to an undiscovered Bedford County brewing tradition.

According to the ledger, In 1797, Conrad Atley, purchased along with other sundries, some British Ale.  Later, in 1798, Jacob Helm purchased some molasses along with wine and other sundries. (Reiley, 1788) During this time, molasses was one of the key ingredients of a small beer recipe. (Baron, 1962) Also, in 1798, Noah Bowser purchased a “Kettle.” (Reiley, 1788) A brew kettle is a critical part of the brewing process, even in today’s brewing process.  Although OldeBBC may never know if these precursors were used to brew beer, we would like to think so.  Therefore, it is this tradition, OldeBBC will embrace.